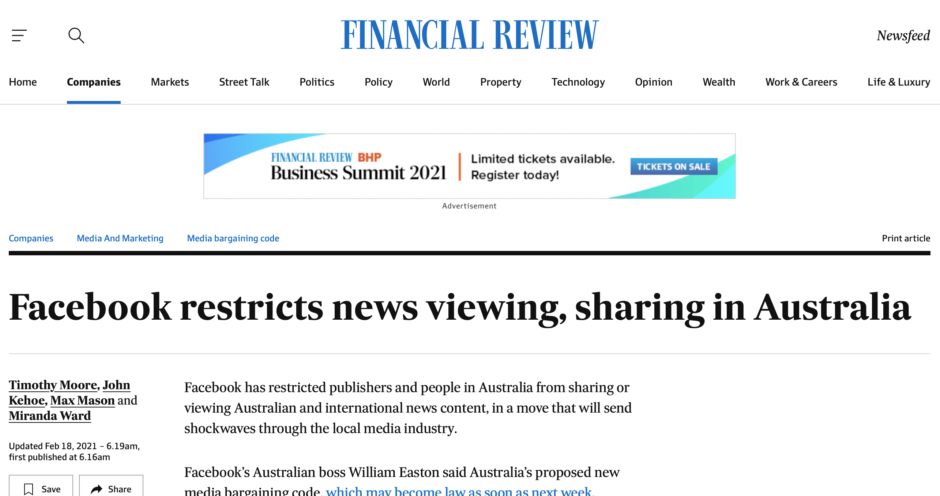 My thinking is – it’s their prerogative. Australian media publishers have gone down the well worn Aussie corporate path of running to Canberra instead of running a proper innovation strategy. The publishers base their claim on a total falsehood they peddled to a Senate inquiry: “social media takes our content”. They don’t. They link to it. They promote it. They provide a platform that partly makes it easier to access and share. They are popular and easy to use indexes. Facebook and Google are maps, not territories.

Print media in Australia used to be massively profitable, with “golden rivers” such as jobs, cars and real estate. They missed the boat, and these profit crutches became Seek, CarSales and RealEstate.com.au. Each of these companies have market capitalisations vastly greater than those of their antecedents.

Further, print media globally spent the first 20-odd years of the internet giving away their content for free. Paywalls are only a relatively recent invention, and print media still relies on advertising (reach-based) and subscriptions (all you can eat monetisation that appeals only to the heaviest readers).

Print media has barely evolved outside of the written word. Facebook might have been irresponsible in advising many to pivot to video; however, print media still work in the realm of text and photos. Their great brands have never evolved into multimedia. For example, The Age’s Epicure section – while filled with brilliant articles – never evolved into the universe of restaurant, food and cooking apps. It never spawned any of the hundreds of food-related TV shows. News Corp never took it’s vast and encyclopaedic library of cricket writing, translated it into Hindi and set up an India-specific website for the billion+ cricket lovers in that country. There are myriad other examples from the world of print media.

As far as monetisation is concerned, if you want a physical paper, you can buy one for a few dollars. However, if you want a digital version of today’s paper, you can’t just buy it for a few dollars. You can only subscribe for a month or more, which is just too much of a barrier for most. It’s a baffling failure of customer experience. And news publishers have done very little to analyse their customers’ reading habits to optimise advertising audiences. Someone paying slightly more attention to articles relating to interest rates and property prices might be put into an audience called: “Prospective property buyer” and sold as a warm lead to those in that industry.

Here’s a parallel: In the old days, you’d have Milk Bars and Newsagents plastered with news boards, headlines of the day. People would sometimes see those boards and buy a newspaper as a result. Instead of thanking and partnering with Milk Bars and Newsagents, imagine if print publishers decided to charge them extra for the privilege of promoting the news. If it sounds mental, it is. That’s precisely where we’re at today.

Another parallel: If Fairfax decided not to continue Good Food anymore, and not review and refer restaurants, restaurants would be rightly pissed off. It would hurt restaurants and partly hurt Fairfax (as people would look to alternate sources for that type of content). But to say: Fairfax has to now pay restaurants for the right to print reviews and link to those restaurants is nonsensical. But that’s where we’re at.

Government should play no role in this. Journalism is vital to a thriving and healthy society. However, print media proprietors and management have failed to provide an evolve an appropriate business model to foster, invest in, and monetise quality journalism. Asking Canberra for some scraps from Facebook and Google’s table is a classic Aussie lazy corporate move, and at best, only a stop-gap measure. They need to start innovating – today.

Here’s what I’ve said to B&T about the issue: Google vs Media – Lessons from the Showdown