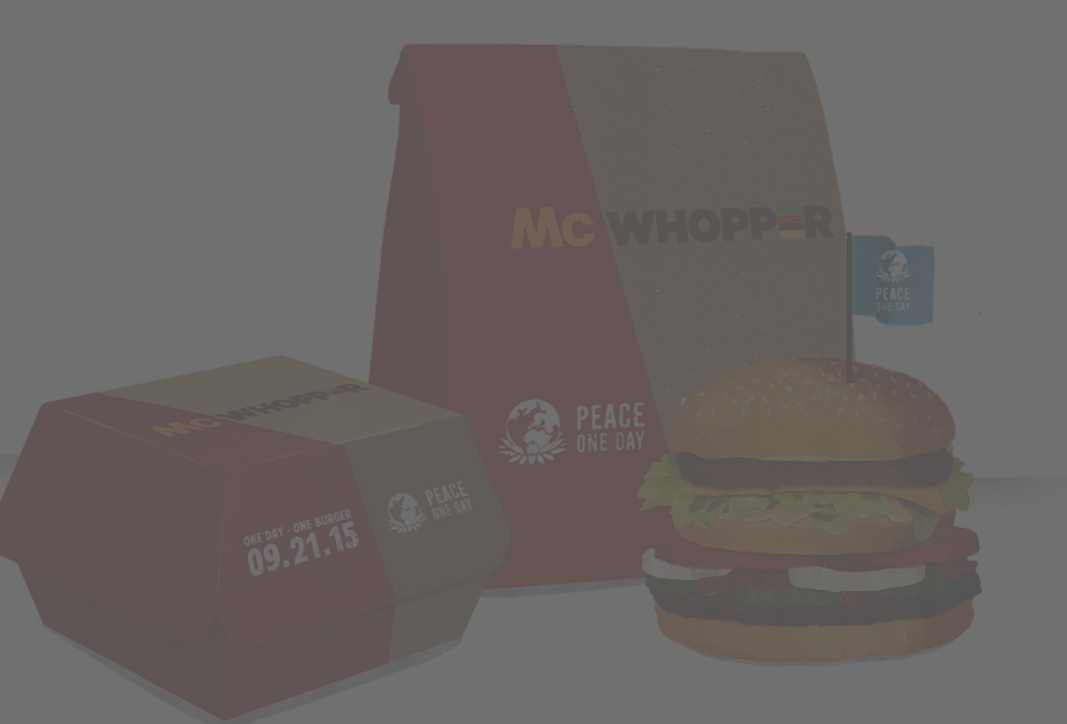 Ambush is a key tactic in war and McDonald’s executives have had to endure an ambush of a bizarre nature.

Burger King’s attempt to create a unified “McWhopper” in order to raise awareness of the ‘Peace One Day’ charity were met with an entirely predictable reaction; media outlets all over the world covered it and the emotional echo-chambers of social media have worked themselves into a frenzy of excitement..

Despite this relatively positive reaction, McDonald’s has chosen not to participate. In an open letter…

Inspiration for a good cause… great idea.

We love the intention but think our two brands could do something bigger to make a difference.

We commit to raise awareness worldwide, perhaps you’ll join us in a meaningful global effort? And every day, let’s acknowledge that between us there is simply a friendly business competition and certainly not the unequaled circumstances of the real pain and suffering of war. We’ll be in touch.

P.S. A simple phone call will do next time.

As much as they’ve now been condemned for not being part of what might be regarded as a worthy initiative of world peace, McDonald’s are right to avoid this initiative at all costs. Here’s why.

Firstly, it’s contextually distasteful and based on a woefully inaccurate premise. War is hell. Commercial competition is barely even competitive most of the time. And unlike war, where the hallmarks of victory are absolute dominance with a trail of destruction and misery, Burger King’s initiative is based on a fundamentally flawed view of commercial competition, one that demonstrates almost no recognition of innovation and growth – better competition mainly leads to better or cheaper products, which benefits consumers. War is miserable, sad and overwhelmingly destructive. There is absolutely no comparison possible between capitalism and war – and to suggest there is is highly dishonourable.

Secondly, many organisations seek to raise social welfare through corporate social responsibility programs. Burger King has decided that solving the problems of ‘world peace’ is how they believe they can raise social welfare. However, any CSR program must do two things. It must raise profits and it must raise social welfare. A great example is where Mars sets up manufacturing plants in regional towns where there is less opportunity for employment – thereby having a cheaper and more loyal workforce, while having the benefit of raising the employment prospects of small towns.

Raising social welfare without raising profits (as many so-called CSR programs do) is simply borrowed virtue – a lame attempt to seem like a nice company, as if their everyday activities were ugly and unworthy, so they undertake social activities to assuage their feelings of unworthiness. At best, Burger King’s connection with world peace is borrowed virtue. However, what is more likely is that Burger King will neither raise social welfare, nor will it raise profits, so it is simply delusional CSR. For anyone to think that a marketing gimmick such as this will increase sales of Whoppers and cause warring government leaders and terrorist organisations all over the globe to pause and reflect is simply delusional. Any thought that it could be ‘fun’ or ‘being in the spirit of doing the right thing’, fails to acknowledge that the primary role of marketers isn’t to have fun but to work incredibly hard to grow brands, grow distribution and grow product to increase profits.

If McDonald’s were to participate, it would help increase Whopper’s brand context, almost as if to regard the Whopper as an equal to the all conquering Big Mac, when the truth is quite different. Whopper sales are vastly lower than Big Mac sales. In coverage of the McWhopper attempt, the New York Times called Burger King “a perennial also-ran” who “even ceded its position as the world’s number two burger chain to Wendy’s’. Just as Kevin Rudd sent junior ministers to fight Malcolm Turnbull in an effort to position him as a less senior leader, Burger King are attempting at positioning their less famous burger as a peer, an equal. McDonald’s should always position the Big Mac as the leading global burger without peer. By even acknowledging that there could be a comparison between the two burgers either boosts the Whopper and/or reduces the Big Mac to a common competitor.

While the McWhopper may have been available only in one pop-up store, any further attempt to increase Burger King’s distribution into the much larger McDonald’s network via the McWhopper should be completely rejected. McDonald’s has 34,000 locations worldwide compared to 12,000 for Burger King; the smaller player being distributed by the bigger one benefits only the smaller player.

One of the most important reasons why McDonald’s were right to reject Burger King’s overtures was because of McDonald’s wonderful brand assets, particularly around the Big Mac. From the image of the Big Mac, to the line ‘two all beef patties, special sauce, lettuce, cheese, pickles, onions on a sesame seed bun’, it’s as iconic a product as a Coke bottle, Vespa or Oreo cookie, or brand asset as the Michelin Man, Intel’s chime or Cadbury’s purple. It should never be adulterated, it should never be modified, and in a most McDonald’s-like manner, it should always remain utterly consistent. McDonald’s might never scale the culinary heights, but one of the keys to its success is that it’s consistently never shit, never disappointing. By changing the Big Mac, McDonald’s risks change, it risks inconsistencies, it risk s losing customers.

While neither Burger King nor McDonald’s advertisements have been very memorable, distinctive or fun for a very long time, using hollow slacktivism as a selling point is the lowest form of creativity, and something that most unimaginative advertising agencies do regularly in an attempt to win creative awards. From Coke delivery drones to lenticular outdoor that sends messages to children who have been abused by their carers, awards reels are filled with work that attempts to ‘make the world a better place’ – at least until judging is over.

McDonald’s CEO response that ‘A simple phone call will do next time’ is spot on. If Burger King truly wanted a sustainable, viable joint program, it may have reached out to McDonald’s in a more subtle way. However, if it was simply about creating buzz measured via tweets, media mentions and other vanity metrics, then it could be regarded as a success. But in terms of building a brand that does stand on its own, that has quality product, well remembered and well distributed, Burger King objectively fails on at least two of these three counts.

Burger King might have won this small PR battle, but they’re losing the war.

The new FlyBuys ad is amazing, and it’s a reminder of how advertising has lost its way
17 February 2021
Why are all US Presidential campaigns asking you to text?
25 February 2020

The most valuable part of Tiffany is the colour blue. LVMH paid $US16bn for it.
26 November 2019